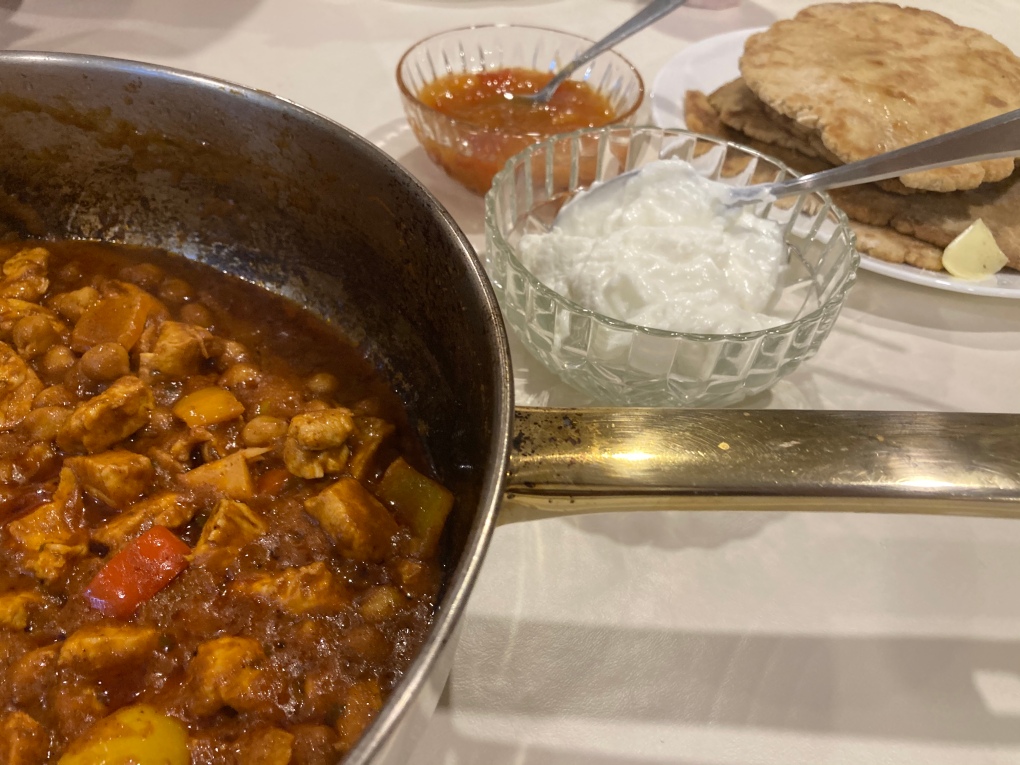 Usually Mondays are our pizza night, but today I wanted something different. I have been wanting to try making GF naan bread for a while now and I decided tonight was the night. We had all of the other ingredients I needed. So we looked and found a Naan bread recipe from Tea for Turmeric and decided to give it a try. Little Girl and I starting working on the dough which was very easy to mix up but the only thing is that you need to give yourself at least an hour to mix, roll out, and cook all the pieces (we made 12).

I rolled out two pieces at a time and cooked them in a large pan with avocado oil. I prefer using that over butter because it has a higher smoking point and won’t make the bread taste burnt if the pan becomes too hot. It’s been over a year, and I am still getting used to my moms commercial gas store.

As the bread (naan) was cooking, I chopped two chicken breasts and starting sautéing them in a pan with some olive oil.

I also cut up three bell peppers, two for eating raw (my kids LOVE raw veggies) and about one peppers worth I cut up and added to the pan with the chicken.

I then added one can of chickpeas, drained. If it was just me, I would have used just veggies and more chickpeas instead of chicken. Yum!

After the chicken was mostly cooked and the chickpeas and peppers had some brown on them, I added this delicious sauce! *note to those that must eat dairy free- this sauce does have milk in it. THIS SAUCE WAS YUMMY!! I found it at Sprouts in FL, but it looks like you can buy the same sauce at Target or Thrive Market. The sauce was labeled “mild” spice and we would agree, but it was not lacking for flavor. Everyone in my family loved it.

Now I’m sure that I could make a homemade sauce and that might be a bit healthier, but sometimes it is worth it to just buy a pre-made component to your meal. It cuts down on time, energy, stress, and maybe even money! Otherwise, I would have had to purchase all of the different ingredients for the sauce. It’s ok to take shortcuts in prepping your meals if it means less stress and better quality mealtime with the kiddos.

I let chicken mixture simmer for 10-20 min. Meanwhile, we finished making the naan and set the table.

I put out a bowl of greek yogurt (the more the better!) and some of this delicious chutney from Trader Joes. If you’ve never had it, chutney is, in my opinion, a sweet/savory sauce that is somewhere between salsa and jelly. This one has some white, soft raisins mixed with ginger and tiny bite from some cayenne pepper. It paired perfectly well with tomatoey chicken and cool yogurt. I think its a must have for this meal.

So there you have it! We served ours by spreading some of the chicken mix on the naan and then topping with yogurt and chutney. Somehow, I did it opposite for the photo here, but it tasted just as good. The chicken, yogurt and chutney would also be delicious served over jasmine rice for a quick dinner.

I hope you are inspired to try a new flavor profile or if Indian is something you usually only get out, maybe you could try making it at home. There is something very rewarding about making your own food, and these Naan were easy for the kids to help with, which they always love to do. I find they are more ready to try something when they helped make it.